Doing Well by Her Members Liza McDonald, the Head of Responsible Investments at Aware Super, one of Australia’s largest superannuation funds, which serves more than one million members. An Australia native, she worked at Mercer Legal, a Melbourne-based superannuation law firm, from…

Reimagining the Future of Work in Financial Services

The Future of Work  Institutional Investor’s Allocator Intel hosted “The Future of Work: An Allocator Roundtable,” based on an exclusive survey answered by more than 170 allocators. After a year in which Covid-19 has altered working environments globally, the investor- and consultant…

One of the fundamental attributes of any public employee retirement plan is that it’s so…public. It seems like every meeting is open to the public, every decision is publicly announced, and every fund action is scrutinized not only by plan participants, but also by elected officials, investment experts, and members of the public, many of whom have an axe to grind. So, it’s not surprising that although Andy Palmer has carved out what many regard as an excellent track record as CIO of the Maryland State Retirement and Pension System (MSRP), the system has been periodically chastised by state legislators and political commentators for everything from the fees paid to Wall Street firms and the level of investment returns to inadequate or inappropriate diversity and ESG programs. These ongoing battles continue to be played out in the pages of both The Washington Post and The Baltimore Sun.

But Palmer, who became CIO of the $54 billion plan in July 2015 after spending nine years at the Tennessee Consolidated Retirement System, knows that controversy is part of the job description in the public funds world, and he has kept his focus on enhancing the investment returns and organizational effectiveness of the Maryland system, which covers state government employees, teachers and assorted other government workers.

Before he got to MSRP, a return controversy had developed around portfolio decisions made after the 2008-09 financial crisis: The plan’s board had concluded that the fund had too much exposure to public equities, and it sought a more balanced and diversified portfolio. As a result it reallocated funds away from public equities into other asset classes, and many complained that it had missed out on much of the post-crisis run up in securities prices. 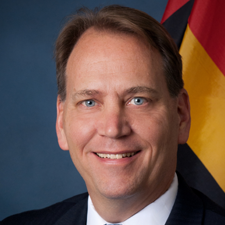 When Palmer arrived in 2015, he worked with the Board to make some early changes in the strategic asset allocation “to improve our balance of risks.” One of the major changes was to move from an intermediate global bond benchmark to a long duration, U.S. focused benchmark. “This change has been the major factor in improving performance of the strategic asset allocation by about 75 basis points per year,” Palmer says. On the other hand, he believes his “biggest unforced error” is that “I hadn’t fully allocated to our long-duration benchmark until this time last year, so we missed out on fully participating in interest rate drops (and therefore bond price appreciation) that we should have had. I should have been more disciplined regarding that longer-term target,” he says.

Meanwhile, Palmer has reduced the role of hedge funds and restructured both the lineup of external managers and the implementation process for investing in bonds, credit, and absolute return products. At the end of last year, the system’s asset allocation was: 37.5% public equity, 18.1% rate-sensitive portfolios, 14.7% private equity, 12.3% real assets, 8.9% credit, and 7.4% absolute return. (The rate-sensitive portfolio includes such instruments as Treasury bonds and TIPS.) He adds that with the high degree of uncertainty and volatility in recent months he has been content to “hover in a range around our policy benchmarks,” but he does believe in tactical asset allocation as an adjunct to strategic allocation and a way to reflect differences between intermediate and long term capital market assumptions.

He does, however, believe in active management. “The value could be in excess returns or it could be in lower volatility, and we’ve experienced both,” he says. While favoring active management, he isn’t firmly in any style camp nor is he a devotee of whatever is the investment flavor of the month. “We try to be balanced,” he says. For example, “We read the research that says factors are persistent and that there is an excess return to be had by focusing on them, but there have been particular times when that has not been the case.” Palmer adds, “You can’t time them, so we try to have exposure to them, and we’re working on calibrating the exposure.”

Nobody has had much control over the COVID-19 virus, and when it took a bite out of the markets, Palmer said, the first thing was “we had to make sure we had cash, because we had benefits to pay.” Beyond that, he says, MSRP “rebalanced at the margin, and we pivoted within different asset classes to add risk.” For example, his team moved from Treasuries to TIPS and both investment grade and CCC-rated corporate bonds.

Going forward, Palmer says, “We’ve been thinking about the role of fixed income.” He’s expecting to have a conversation with the board about that. He’s also thinking about the role of real assets in the portfolio, things like energy funds and commodity-driven products. “We haven’t made any decisions.” Given the current uncertainty about economic conditions, he says, “We’re a bit challenged to understand how things will work going forward.”

In addition to reworking the portfolio, Palmer has been active on other fronts. For example, he says, “Maryland has been a leader in ESG.” MSRP signed the UNPRI in 2006, before Palmer got there, but he went on to shepherd the development of a plan-wide ESG Risk Committee, which examines investments in all asset classes. Maryland was one of the first public plans to look at ESG across the entire portfolio, and it now assesses not only investments but also the general partners it works with on private market undertakings.

“We spend a lot of time on ESG,” Palmer says. He adds, “I’ve always treated ESG as a risk factor, which means that if the market is not recognizing the risk, then the asset should be avoided, but if the market is overpricing that risk, it’s a good investment. We don’t really believe in divestment of assets classes or companies, but we do believe in using our voices to make changes. It’s an important aspect of what we do as investors.”

Palmer has also been active in seeking to improve the resourcing at his operation. “Like many plans, the division was challenged to attract and retain sufficient staff for the business of running a large diversified investment portfolio,” he says. “The improved governance structure has allowed us to begin to address staffing issues and begin managing assets internally.” Working closely with external managers has been a bit of a new experience for Palmer because at Tennessee, he notes, “We managed most of the assets themselves.”

Palmer grew up on Long Island, but from high school on he would spend the next three decades in the Maryland/Washington D.C. area. He earned bachelor’s and master’s degrees at the University of Maryland at College Park and then, he says, “I answered an ad in The Washington Post seeking a math or economics major for a job as a bond analyst. It sounded interesting.” Palmer got the job – at ASB Capital Management in Washington, D.C. in 1985 – and he would spend the next 20 years there, eventually becoming the director of fixed income investments.

Looking back, he says, “I rode the innovative waves of finance and fixed income from mortgages and asset-backed CMBS, credit default swaps. All of those were developed during my career, and I learned them as they were being developed, and implemented them across the spectrum.” But after two decades at ASB, he says, “The company stopped growing; fighting Pimco was a sucker’s game; and I decided to find a plan sponsor allowing me to manage assets in a team, which I love to do.” So, in 1995, he was off to Nashville, where he became director of fixed income at the Tennessee state plan and then, in April 2008, deputy CIO.

Since moving to MSRP in 2015, Palmer has been living with his wife of 35 years outside Baltimore, in Pikesville, Maryland. They have three grown children. He spends his free time exercising and running. He also likes gardening and says he does a lot of reading, mainly nonfiction. Recently he’s read Thinking Fast and Slow by David Kahneman and Atomic Habits by James Clear, but he’s also read The Elegance of the Hedgehog, a novel by Muriel Barbery. “I move around different genres,” he says.

He also likes to think about what he sees as the important role public employee retirement plans can play, a role that, in his view, goes beyond providing a government recruiting and retention tool. “I believe public pension plans are some of the most important economic engines in whatever state they’re in. The pension benefits paid to participants support economic activity within the states. Further, the pension programs may have a significant impact on state finances.” He adds, “In most states, the size of the plan is larger than the state budget. At MSRP, our liabilities are about $75 billion and the state budget is around $40 billion. The success of the investment function is critical but, for the most part, the investment function has been treated like an agency of the state, which means a focus on personnel cost-minimization, and in that way, many of the states have been poorly served. There are a lot of great people doing great things in this sector, but it’s generally under-resourced, so there is a limited scope to do the best things.”

Andrew Palmer is a member of II Network. Sign up today to engage with the global community of asset owners and further discuss with him the content of this article.