If you can rub your tummy and pat your forehead at the same time, you may be a good fit for Doug Brown’s job. Brown is CIO at Exelon Corp., the Chicago-based utility holding company, and his $40 billion bailiwick encompasses five investment platforms. There’s the traditional defined benefits pension fund; a trust for healthcare assets; the employees savings plan; and the Exelon Foundation, which is the company’s philanthropic arm. Plus, “We have this unique animal called the nuclear decommissioning trust (NDT) – which is money set aside to pay for decommissioning nuclear power generation plants,” he says.

“As you might expect, they’re all different,” Brown adds. Yes, all are liability based in some fashion, but beyond that, the NDT is taxable, while the other pools are tax exempt. The defined benefit pension plan has actuarially determined payouts, while the health plan confronts uncertain and rapidly changing medical costs, and the NDT objective is essentially to accumulate a pile of money big enough to cover the costs of decommissioning a nuclear power plant, disposing of its spent fuel, and getting the environment back to pristine standards at some point in the fairly distant future. 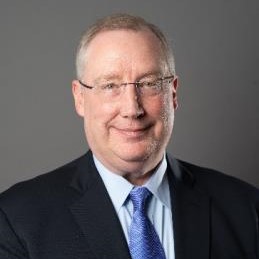 Exelon started life as Commonwealth Edison, the electric utility serving the city of Chicago, but starting in the late 1990s Exelon became a holding company and purchased a series of other utilities, including Peco in Philadelphia, BGE in Baltimore, Pepco in Washington DC, Atlantic City Electric, and Delmarva Power. Those utilities generate a majority of the company’s revenues while the balance comes from a vast merchant power generation fleet. In addition to operating a number of natural gas and renewable power plants, Exelon is the largest nuclear power generating company in the country, and second in the world. It’s also the company with the largest number of electric utility customers in the U.S.

Brown spent 26 years working in finance at Chrysler Corp. in Detroit where “I was fortunate to do a bunch of different things,” including spending a half dozen years as CIO, he says, “and then Exelon decided to start over with the investment activity, and they knocked on my door.”

By starting over, he means, “The company decided to go in a different direction post the financial crisis, so I came in at the end of 2009 with a clean sheet of paper to rework the governance structure, build the team, and pursue new investment strategies.”

For the pension fund, he explains, “We wanted to take a liability-based approach, but also have a really robust, diverse, return generating portfolio which would have a fair amount of alternative assets, so that’s how we morphed.” Now, he says, “We have a third global long-only equities, a third in fixed income – that matches the pension liabilities – and a third in various alternative assets, from private equity and real estate to private credit and various nondirectional hedge funds. “We have enough fire power in the return-generating portfolio for our needs, and then there is the fixed income portfolio which hedges the liability and helps protects us from undue risk,” he says, adding, “It’s an allocation that has served us well.”

That proposition was tested in February and March, he says: “We went slightly negative from a return point of view in March, but because we have that liability hedge which consists of long-term Treasury securities and investment grade corporate bonds, that has been the ballast in the portfolio, so we went slightly negative but then year-to-date we are now mid-single digit  positive.” He adds, “We shored up liquidity early on because we’re running a big pension fund, and we used the opportunity to rebalance a little bit.” But, he says, “We stayed the course. We will tinker around the margin, but we like our asset allocation,”

Meanwhile, Exelon is part of a small number of institutions running NDTs. Brown has confessed that when he got to Exelon, “I had absolutely no idea what a nuclear decommissioning trust was.” Exelon has 12 nuclear generation plants, with 21 nuclear “units” or reactors that will need to be decommissioned when their licenses run out at assorted dates extending as far out as 2054. There’s not a lot of experience in closing nuclear plants; the federal government has yet to establish a national repository for spent fuel; and there’s different methodologies for calculating the funded status of an NDT.

However, the basic premise is clear: All nuclear plants have finite licenses from the government and must eventually retire. And you don’t just turn off the lights and lock the door if you’re leaving a nuclear reactor, “so we have money set aside to be there when it’s time to decommission these facilities,” Brown explains.

These trusts are taxable, unlike pension money, and in fact, each nuclear unit has two investment trusts with two different tax rates, so Brown is overseeing 42 trusts. In some ways NDT investing looks easy: The liabilities are well into the future, and there’s no liquidity constraints since no money will be paid out before decommissioning begins. Interest rate risk is not a major issue, as it is with pension funds, where interest rate changes can create substantial P&L consequences for the plan sponsor and engender significant volatility in contributions. Interest rates changes don’t materially affect NDT, he says, “What you do have is inflation risk.” There is some degree of uncertainty in estimating how much it will cost to close up a nuclear plant 20 years from today.

There were originally rules that seemed to restrict NDT investments to municipal bonds and T-bills, but these were liberalized in the mid-1990s, so NDT’s could move to tax-advantaged equities and fixed income. More recently, Brown has been building up exposure to public and private equity as well as real estate – “things that will do a nice job of keeping up with inflation.” He’s also introduced better hedges. But in doing all this, being tax efficient is crucial. Brown says the Exelon NDTs “are essentially fully funded.”

While the broad contours of the asset allocations remain steady for each of his portfolios, Brown has been tinkering with approaches to the various asset classes and sectors. In the case of hedge funds, for example, he says “if you go back a few years,” the pension funds “had a 10% allocation to hedge funds. But we’ve done a couple of things. One is, we reduced that. But we also reallocated a little bit, so for example, we took the long-short equity hedge funds and put that in with our equity and credit hedge funds we put in our fixed income allocation.” Now, he adds, “On the pension side, we have a 5% allocation to non-directional, and that’s a series of strategies where we try to find a low correlation to equity markets and to the other things in our portfolio. Our non-directional hedge fund bucket has performed quite well.

Meanwhile, he admits to being a little perplexed about fixed income these days. “If you go back six, seven, eight years, everybody and his brother thought interest rates would go up – and they went down. If you had just an absolute return portfolio and didn’t have a liability, I would argue you wouldn’t own much in the way of fixed income because rates are so low. But it’s really a liability-managing tool – to match the duration of our liabilities – so it serves as a hedge.” And that’s reason enough to own some, Brown argues.

As for equities, Brown says, “the biggest mistake” he has made is that while “we’ve had very good success, we are sometimes a little too risk adverse; we’ve perhaps been a bit too conservative from an asset allocation point of view; so we’ve probably left a little bit on the table. But it helps us sleep at night and hasn’t really impacted our returns over time.”

Asked about his best decision, he says it’s building what he regards as an all-star team. Brown has long been a team player. He was born in Patterson, New Jersey, but grew up around Detroit and went to Albion College in Michigan, where he played Division III football. In college, he recalls, “Like most young people, I had no idea what I wanted to do.” But he was interested in markets and majored in economics. He wrangled an internship at what was then the Atlantic-Richfield Oil Company in Philadelphia, and that really piqued my interest in finance.” After college, he would go on to spend the next 26 years at Chrysler overseeing what ended up being about $30 billion in investment assets.

These days, Brown and is wife live in the Chicago area. He has three grown children. His two major diversions are golf and reading. “I try to read more fiction if I go on vacation,” he says, “but because I’m an investment nerd, I read a lot about finance.” Recently, he says, he re-read two books about the 2008 financial crisis, Too Big to Fail: The Inside Story of How Wall Street and Washington Fought to Save the Financial System--and Themselves by Andrew Ross Sorkin and On the Brink: Inside the Race to Stop the Collapse of the Global Financial System by former Treasury Secretary Henry Paulson: “I read them when they came out, and in late March period, when things were really dicey, and I was closely following what Jay Powell and Steve Mnuchin were doing, I thought I would re-read them.”

In comparing and contrasting 2008 and 2020, he notes that there was not a complete shutdown of the global economy in 2008 as there was earlier this year; but on the other hand in 2008 as the Fed sought to craft a response, “it hadn’t done this before,” whereas this time around “the Fed had a huge advantage of things already being put in place.” So he doesn’t think this is another “on the brink” moment.

Doug Brown is a member of II Network. Sign up today to engage with the global community of asset owners and further discuss with him the content of this article.