Creating a framework to target, manage and measure the social and environmental impact of our investments Aaron Pinnock, Impact Investment Analyst at Church Commissioners for England shares his white paper where he deconstructs investment impact in terms of its primary activity; the…

Jeroen Kakebeeke Sr. Investment Risk Manager at PGGM Informs on How Both the Corona Pandemic and the Equity Market Reach New Highs

Jeroen Kakebeeke is the Senior Investment Risk Manager at PGGM Investments. In this white paper he reports on the Corona Pandemic, the Global Economy and the Financial Markets as of October 26, 2020.

At the end of January I strongly recommended to sell equities because of the coming Corona pandemic. Financial markets completely overlooked consequences for the economy and companies. In March I gave a roadmap to return to the strategic asset allocation; you can find the initial paper here and the follow up here. In this letter I share the latest ideas about global risks and investment returns, becoming cautious again.

It is necessary to understand the Corona outbreak to make any forward looking statements on the economy or financial markets. Although we know the numbers of infected and dead are incomplete (underreported), they give direction. Globally, the pandemic is not under control! Especially in the Western world, the second Corona wave surges. Mainly young people are hit and treatment has improved, thus hospitalizations and dead are less pronounced. However, the rest of the population is under threat, reviving fear and government imposed lockdowns. 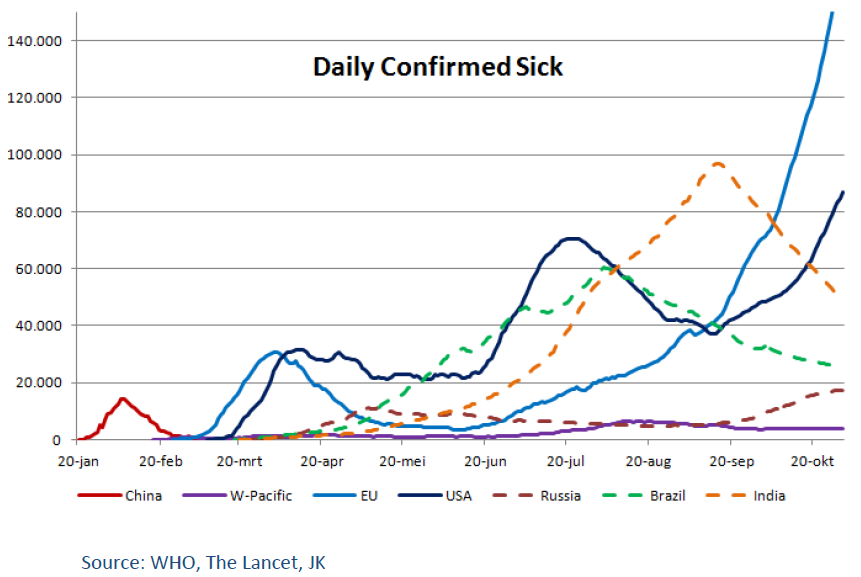 The short half-life of antibodies explains why some people got sick for a second time, and makes it scary to realize that herd immunity will probably never be realized (King’s College London, July 2020 and Imperial College London, October 2020, with tests on more than 365,000 people in England). These medical experts say it is near-impossible to eliminate the stealthy virus. The expected duration of the pandemic got much longer, see table below.

Only two Russian vaccines, Sputnik-V and EpiVacCorona, have been granted regulatory approval, both without entering Phase 3 clinical trials. Currently seven other vaccines are in Phase 3, of which most are expected to enter the market in 2021. Western drug makers have faced delays in the testing phase. China seems leading, with vaccine candidates undergoing clinical trials in the United Arab Emirates (Sinopharm), Brazil, Saudi Arabia and Indonesia (Sinovac). Those countries were chosen as China no longer has enough cases to put the products to the test.

A Corona vaccine is not the magic bullet, only an aid. Experts hope the effectiveness of the vaccine will come close to the 67% protection offered on average by the flu shot. The Chinese regulator demands vaccines to have at least 50 percent efficacy. Hopefully half of the people is prepared to take the vaccine, then a quarter of the population is protected.
Corona still has many unknowns: how lung and heart tissue is damaged, what is the relation to fatigue or other impacts of the body? The majority of the people lives up to the Corona safety rules. The sad thing is that the minority, who behaves irresponsible, screw it up for the whole population. For sure, the coming winter season will be accompanied by a big health crisis. 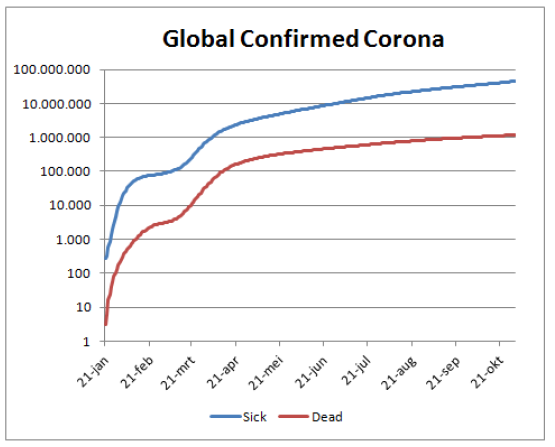 At the end of 2020, the global cumulative sick seems to reach 100 million.

The public health crisis is intertwined with an economic crisis. Any choice demands something to be sacrificed for the greater good. As long as physical distancing will be the norm, the economic recovery will be incomplete. Both supply and demand are subdued in the Corona era. Government stimulus is financed by central banks printing money, so the worst outcome is evaded. But for how long?
Some large listed companies have advantages in access to government support, access to capital, and globally diversified sales. Multiple surveys indicate a positive sentiment among large companies. SMEs are much more vulnerable, since they are very dependent on the sector or region they operate. For employees being (un)employed, it is often an all-or-nothing. Employment is the long term indicator how the economy moves, especially in the US where consumers have the largest contribution to GDP. When comparing the ‘change in payrolls’ between the 2008 Great Financial Crisis and the Corona crisis, the current recession is worse. 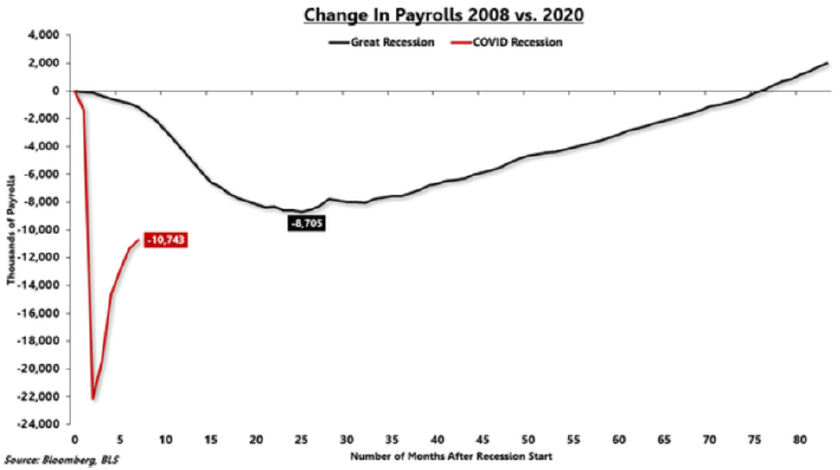 The IMF World Economic Outlook of October 2020 became somber. ‘After the rebound in 2021, global growth is expected to gradually slow to about 3.5 percent into the medium term. It is a severe setback to the projected improvement in average living standards across all country groups. The pandemic will reverse the progress made since the 1990s in reducing global poverty and will increase inequality.

The scarring is expected to compound forces that dragged productivity growth lower across many economies in the years leading up to the pandemic: relatively slow investment growth, more modest improvements in human capital, and slower efficiency gains in combining technology with factors of production. 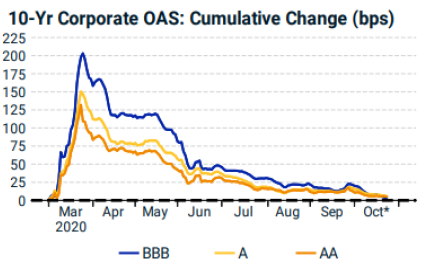 Standard & Poor’s reported 55 defaults on investment grade credits (IGC) in the US over 1H2020. Entertainment, energy and retail were the obvious sectors with most casualties. Defaults are a lagging indicator. More credit ratings are falling than rising, the worst has still to come. However, credit spreads are back to pre-Corona, see graph. It looks like investors are (too) positive. The same goes for investors in Europe as well.

High Yield defaults are expected to rise to 11% in the US and 9% in Europe. Credit spreads have widened and narrowed in the same fashion as with IGC. Here, investors are positive too. 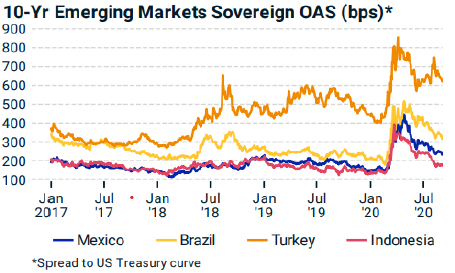 Emerging Market Debt (Hard and Local Currency) have high spreads relative to history and US Treasury. Contrary to other fixed income classes, the initial jump in spreads has not come down completely. Besides the higher yield, expect additional profits in lower spreads going forward. And also an appreciation of local currency. This asset class is overweight, only because I dislike the return risk perspectives on all other asset classes.

Developed and Emerging Market Equity quickly recovered from the Corona led shock wave. It was directly linked to government support for the economy, which prevented a meltdown. And indirectly to Central Bank intervention to lower risk free interest rates. This made corporate debt cheaper for enterprises. So leverage & equity valuations were inflated.

In the performance attribution of MSCI country indices, Corona is a clear and present danger: 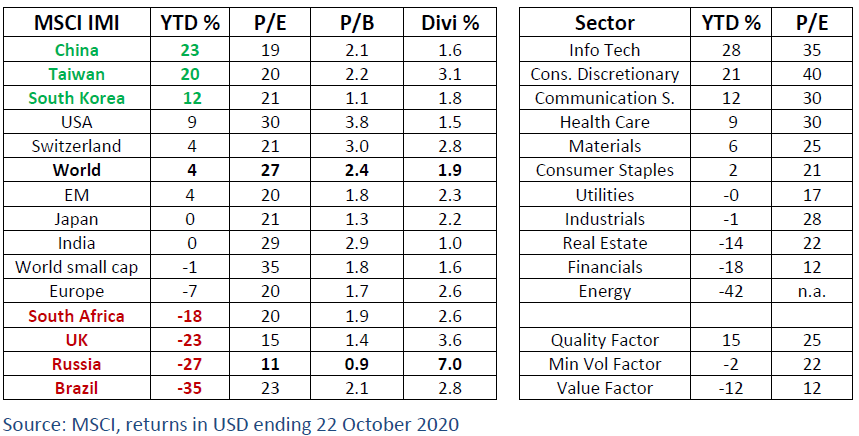 All valuations became more expensive since July. Partly by hope on the introduction of vaccines as a magic bullet; partly by the lower interest rates. Investors use Discounted Cash Flow (DCF) calculations in pursuit of the intrinsic value of securities. This is a strong theoretical and practical model, ranging from simple to very complex. In formula it states the Price/Earnings ratio equals FCF/(WACC-G). The most realistic inputs are 5% WACC and 1% growth, but 6% WACC and 2% growth is fine too. Both result in a PE-ratio of 25 for the general equity market post Corona, coming from 20. For 1% point lower risk free rate pre and post Corona, it calculates a 25% higher valuation, ceteris paribus.
FactSet EPS estimates were in a downward trajectory, but have been upgraded twice since June, lagging the Corona pandemic. Next year is best to set a target for US index S&P 500, with a forward PE of 24. The aggregate analysts’ estimate is $160, leading to a target of 3.800.

There is a disconnect between the surge of Corona, evolving macro-dangers, and elevated asset prices. Government money and lower interest rates explain the recovery in the summer. But going forward, it cannot be that both the Corona Pandemic and the Equity Market reach new highs.

Consensus estimates for the stock market are lagging and contain a best case scenario. Based on these, US equity has an upside potential of around 7% annually, in line with the long term average. In the years ahead, it is possible that higher EPS compensates a lower PE-ratio. Asian and European equity offer comparable expected returns.

However, winter is coming, and the Corona pandemic will be worse. Fear, lockdowns, and the effects from a large pool of unemployed people will hurt an already fragile economy, with a likely series of profit warnings. In this base case scenario most risk seeking assets move sideways next year. Investors are not rewarded for the volatility.

drs Jeroen Kakebeeke RBA is an Advisory Board member of Institutional Investor working as Investment Risk Manager for a large pension fund. The views expressed in this paper are his own. The author thanks Kiemthin Tjong Tjin Joe for his valuable ideas. To discuss the content of this article and further engage with him, comment below.