How will Standardization be Achieved? In ESG, achieving a type of standardization in reporting should not be a top-down-only approach where a regulatory entity dictates all the rules and protocols with strict specificity, without any input from the investment community. As an…

It’s important to be making good decisions under stress; but equally important is not making bad decisions

For many of the 750,000 participants in PensionDanmark, their retirement plan comes to them, not only in their mailbox or electronically in their bank accounts, but also on the road, as a brightly colored PensionDanmark bus sometimes goes cruising along this small nation’s roads, stopping at various employers so PensionDanmark staff can offer information and answer questions. Denmark, with a total population of about 5.8 million, has an estimated three million people in its labor force, and nearly a quarter of them are enrolled in PensionDanmark. While there is a state social pension system, PensionDanmark is part of the sturdy “second pillar” bolstering retirement income, and PensionDanmark staff members like Erik Bennike play a critical role in helping to ensure that many Danes have a meaningful pension. 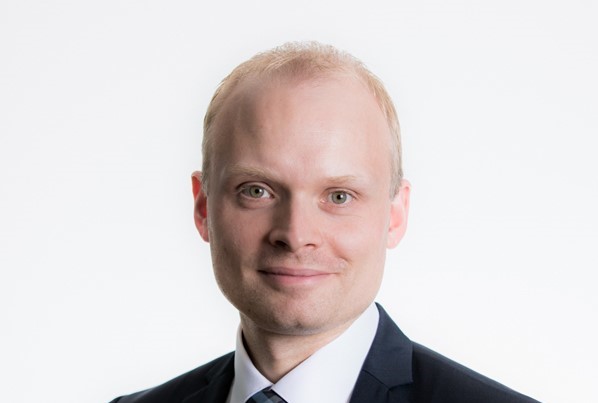 Bennike is head of credit at PensionDanmark, which was set up in the early 1990s as a retirement plan for blue collar workers. It now has $40 billion in assets, making it one of Denmark’s top five pension funds. Bennike’s work on fixed income is critical at PensionDanmark because it’s a defined contribution plan built on a target date fund model. Bennike says, “We are fortunate enough that we don’t have fixed liabilities to any meaningful extent. We invest as we see fit, and the members get the returns we are able to generate for them.” But he adds, “We have a lifecycle strategy, so we decrease risk as members grow older.” That means that, at the beginning of 2020 for example, a typical account for a member under age 46 would have an asset allocation of 48.8% global equities, 10.3% investment grade bonds, and 6.3% private equity. But by the time that member is 67, their allocation would be 20.7% global equities, 36.4% investment grade bonds and 2.5% private equity. (And more specifically, the allocation to European government and mortgage bonds would have gone from 10.1% to 36.3%.) It’s worked out well for both age groups. In 2019, younger members had a return of 16.1% while older members earned 9.5%.  And for the decade beginning in 2009, younger members had an average annual return of 9.4% while older members had an average of 7.6%.

Bennike acknowledges that managing fixed income has become increasingly tricky as interest rates in Europe have plummeted to zero and have even gone negative for some instruments. Like so many others, PensionDanmark has been searching for yield. “We tried to do it in the best way. I don’t want to say we’ve done it intelligently because that would imply that everything else is stupid.” But he says, “We haven’t increased the allocation in credit.” Instead, he has been decidedly selective. The search for yield will inevitably increase tail risk, he says, “but we monitor it all the time to see how things actually look, and then we will try to generate three-year and one-year expectations out of that, and we have scenario analyses and check whether it’s gotten worse or not. So far we think the credit spreads compensate you for the risk.” These days, Bennike’s credit team not only manages investment grade issues, but also high yield and emerging market bonds, as well as leveraged loans and CLOs.  He admits that “a lot of what we do in credit is camouflaged equity risk.” Actually, PensionDanmark has, in fact, also added low risk equities. And Bennike says, “The other thing has been to increase our allocation to alternatives: We see the risk there as different from traditional equity risk, which means that there will be some kind of diversification benefit because we’re combining different things. That means we can take on more risk in general.” These days, PensionDanmark has about a fifth of its assets in alternatives which includes direct investments in infrastructure and renewable assets as well as real estate and private lending. Bennike says these provide “stable” as well as “attractive” cash flows. But Bennike maintains the watchwords in investing at PensionDanmark continue to be “value-oriented,” “contrarian” and “quality.”

As it constructs its portfolio, PensionDanmark, like other Scandinavian investors, is deeply involved in ESG issues. He says, “One of the trends that’s extremely prevalent is sustainability. That goes for pretty much every asset class, but increasingly that’s a focus area for fixed income.” He notes that PensionDanmark invests in green bonds, “and I think it’s fair to say the share of those – and attention to those – will only increase as time goes by.” As PensionDanmark seeks to focus on undertakings that emphasize sustainability and environmental responsibility, Bennike says, “A very large part of what we’ve been doing has been renewable energy, so we own quite a lot of stuff in windmill farms, biomass farms, and solar. It’s not without risk, but we think we’ve found a model where we get pretty nice risk-adjusted returns.” He adds, “How we started was to buy into brownfield projects – something that has already been constructed – but making sure our counterparty had operating expertise, which we as a pension have very little knowledge of. That meant there is still some risk, but most of the risk is pretty quantifiable, and typically, there will be a fixed price agreement which spans 10 to 20 years. That means to some extent you can view this as a fixed income stream.” As it got deeper into infrastructure projects, Bennike points out, “We’ve helped establish what has now become one of the larger managers, Copenhagen Infrastructure Partners, and they sit on a significant portion of our investments in alternatives.” He adds, “A lot of people have moved into that asset class,” but it’s important to be part of sizable and green field projects “because that’s where the large benefits exist, so that’s why we thought it’s important to establish this new manager which now has over  a hundred employees.”

In 2019, PensionDanmark published its first audited ESG annual report. Among other results tallied, it documented the reduction in the carbon footprint of is investment portfolio and determined that emissions avoided because of its investments in renewable energy and infrastructure  are now three times greater than the total CO2 emissions from its listed equity portfolio. Bennike says the COVID-19 pandemic has not had a major immediate impact on the PensionDanmark portfolio, although he sees reasons for caution in the bond market down the road. “We’ve been active throughout all of the year in adjusting our exposure. We mostly do that through our equity futures overlay but rarely through credit.” He explains, “We did buy high yield bonds in late March, which we think were oversold,” but, “I regard credit as something you will want to buy for strategic exposure. It doesn’t lend itself well to tactical trading – you are better off doing that in equities.”

Amid the market turmoil, he says, “I’m proud we didn’t even consider selling credit at that point in time. If you want to buy risk in general, you want to make sure you’re not prone to panic, and I think this crisis proves that this organization can handle volatility. So, it’s important to be making good decisions under stress; but equally important is not making bad decisions, and I think we proved that.” In the months ahead, he says, “There will be downgrades, and there will be a default cycle. However, when we did a bottom up analysis of high yield issuers, we concluded that the vast majority of companies are able to manage the risk. Hence, the markets’ knee jerk reaction to expectations of default rates was somewhat exaggerated.” Although he agrees that the pandemic has unleashed a global recession, “it’s not something that we think really warrants us to move in any direction.”

Bennike grew up around Copenhagen and went to university there. He was initially interested in chemistry, “but I didn’t want to spend my life wearing a white coat and being stuck in a laboratory.” Economics seemed to combine math and political science, and he particularly liked economic model building. After university, he joined a German bank, but at the time of the Global Financial Crisis, “many banks ran into issues and had to close foreign branches,” he says. That took him to the Danish Ministry of Finance to do economic research. “It was interesting, and I learned a lot, but I also learned it was not something I wanted to do with the rest of my life.” And that led him to PensionDanmark in August 2010.

Bennike lives a 20-minute bicycle ride from the office with his wife and two children. As for hobbies, he says, “To be perfectly honest, I don’t have enough time for it. I would love to say I read this and that biography, but when you have kids and a full time job, the time is better spent on the couch.” He’s getting more couch time that he would like, however. “Both my wife and I are keen travelers,” Bennike says, “which makes it a nightmare these days. We are members of a travel club where you need to have visited as many countries as you are years old and maintain our status with at least one new country per year. Right now the maintenance of those requirements is slightly difficult.” They’ve visited some 60 countries already, including not only European neighbors but everything from Nepal to Peru and Bolivia. But these days, if Bennike wants to travel, maybe his best bet is to get on the PensionDanmark bus.

Erik Bennike is a member of II Network. Sign up today to engage with the global community of asset owners and further discuss with him the content of this article.